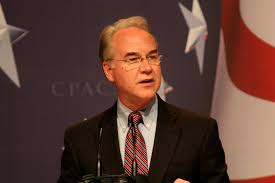 President Donald Trump’s choice to head the US Department of Health and Human Services, Tom Price, doesn’t like Medicare experiments in which physicians, hospitals, and patients have no choice but to participate.  This means that the mandatory bundled payment models just approved by the Centers for Medicare & Medicaid Services (CMS) are on a collision course with the new Trump administration.

Let us explain…The CMS has introduced more than a dozen new Medicare payment models which offer new ways to reimburse providers for their services. Most of them stem from the Center for Medicare and Medicaid Innovation, whose strategy is to create various initiatives, evaluate them quickly, and expand those that reduce spending without harming quality of care.

The strategy of the CMS to experiment with and adopt APMs creates conflicts, especially when organizations participating in a bundled-payment program treat patients who are also attributed to an ACO.  How should the CMS resolve such conflicts going forward? One argument is that the CMS policy should promote integrated, population-based care, in which ACO beneficiaries are excluded from bundled payments unless bundle participants are part of an ACO. Another argument is that the CMS policy should promote financial incentives to improve care, and since bundle participants bear financial risk for losses while most ACOs currently do not, bundle participants should have first priority. The CMS could also consider a geographic approach, in which ACOs get precedence in markets with moderate-to-high ACO penetration and bundle participants get precedence elsewhere.

Until now, the CMS’s strategy of developing and testing different payment models has been effective.  But effectiveness appears to not be the measure that will be used going forward.  Whether the CMS continues its experimental approach will be up to the Mr. Price and the new administration. Decisions on this will be made July 1, 2017.

Biosimilars on the Sale Rack