Researchers have found a consistent association between a higher intake of the provitamin A carotenoid β-cryptoxanthin (BCX) and a lower risk of lung cancer among smokers, but the molecular basis for this association has been elusive—until now.

BCX is responsible for a plants bright red, yellow and orange hues. The provitiman is found primarily in sweet red peppers, pumpkin, carrots, yams, cantaloupe, mango and oranges, has recently been shown to reduce the number and invasiveness of tumors in mouse and cell models of lung cancer. These miraculous findings were published by Anita Iskander and colleagues at Tufts University in the November issue of Cancer Prevention Research (“β-Cryptoxanthin Reduced Lung Tumor Multiplicity and Inhibited Lung Cancer Cell Motility by Downregulating Nicotinic Acetylcholine Receptor α7 Signaling” 9(11) 875-886. DOI:10.1158/1940-6207).

These researchers studied the effects of BCX using a mouse strain that develops lung tumors when exposed to 4-(methylnitrosamino )-1-(3-pyridyl)-1-butanone [NNK]—a carcinogenic nitrosamine found in tobacco products and some electronic-cigarette liquids. 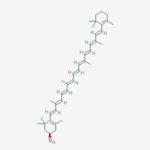 For two weeks prior to a single high dose of NNK and for 16 weeks after, mice were given BCX in their normal daily diet, at concentrations of either one or 10 milligrams per kilogram of food. The team calculated that these doses are equivalent to approximately 0.087 and 0.87 milligrams of daily BCX intake in humans. As a reference point, this intake would be equivalent to eating a medium sized fruit, or a cup of vegetables.

At the end of the experimental period, mice fed BCX developed on average 50 to 60 percent fewer tumors than mice not fed BCX, with a slightly stronger reduction in the group that ate more BCX. No differences in tumor size or type were observed. In parallel in vitro experiments, cultured human lung cancer cells that were treated with varying doses of BCX had significantly reduced migration and invasion capacity compared with non-treated cells.

BCX likely reduces tumor number and invasiveness by downregulating signaling of a specific cellular receptor, nicotine alphacholine receptor alpha7 (nAChR). Prior studies have suggested that exposure to nicotine and NNK triggers overproduction of nAChR in lung tissue, which can lead to increased cell growth, cell migration and risk for tumor formation. In the current study, Iskander et. al. found that BCX-fed mice had roughly half the nAChR levels in their lung tissue after NNK exposure compared to mice on a normal diet. Additional laboratory experiments revealed that BCX suppresses the expression of nAChR and associated signaling pathways that promote cell growth and migration, and that BCX had no effect on cells lacking nAChR.

These results suggest that BCX inhibits lung tumorigenesis and cancer cell motility through the downregulation of α7-nAChR/PI3K signaling, independent of its provitamin A activity. Therefore, BCX can be used as a chemo preventive agent or a chemotherapeutic compound against lung cancer.