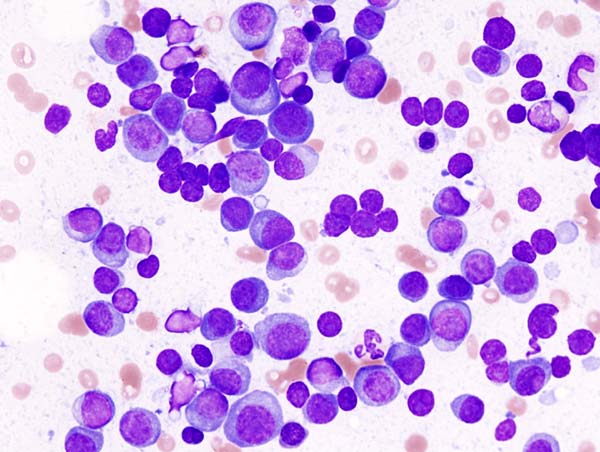 Multiple Myeloma (MM) is a plasma cell malignancy that accounts for approximately 1% of all cancers.  The disease often involves bone and kidney, causing morbidity from pathological fractures, bone pain, spinal cord compression and renal failure. In the past decade, intensive research into the biology of myeloma has exposed many new potential therapeutic targets. In November 2015, three new therapies were approved by FDA for MM:  daratumumab (Darzalex®), ixazomib (Nonlaro®) and elotuzumab (Empliciti®).  All are indicated for MM that has returned after prior therapy.

Daratumumab (from Genmab/Janssen) is a human IgG1κ monoclonal antibody that targets CD38, a transmembrane glycoprotein found at low levels on lymphoid and myeloid cells, and is involved with calcium flux and signal transduction. CD38 is overexpressed in MM, and it was identified more than 20 years ago as a potential therapeutic target for MM. Daratumumab was identified in preclinical studies as having uniquely potent activity by killing MM cancer cells through complement-dependent cytotoxicity and antibody-dependent cellular cytotoxicity.

Results of initial clinical testing were reported in 2012.  It was evaluated in a phase I/II study where it demonstrated striking effectiveness as a single agent in heavily pretreated patients.1 In a cohort of 42 patients receiving 16 mg/kg, 64 percent of patients were refractory to both bortezomib and lenalidomide, 17 percent were refractory to carfilzomib, and 36 percent were refractory to pomalidomide. Responses were durable, and 65 percent of patients who had a response were free of progression at one year. The most common adverse events were infusion-related reactions.  In 2013 it was given breakthrough therapy status.

A phase II study (SIRIUS) in a similar refractory MM population followed, the results of which were reported at the annual meeting of the American Society of Clinical Oncology in 2015.  The SIRIUS study was a phase II trial of daratumumab as a single agent in patients who had three or more prior lines of therapy, including a proteasome inhibitor and an immunomodulatory agent, and it showed an overall response of 29 percent. A marketing application followed, and the drug was approved in both the US (2015) and EU (2016).  These findings establish daratumumab as the first monoclonal antibody to have single-agent activity, particularly in a challenging patient population with refractory disease.

According to Mark Roschewski, M.D., of the Lymphoid Malignancies Branch in NCI’s Center for Cancer Research, “The most exciting of the[se newest] three drugs is daratumumab, because it showed single-agent activity.  It is not, by itself, going to cure multiple myeloma, and the duration of remission is relatively short, but it certainly provides some meaningful benefit, particularly if a patient doesn’t have any other treatment options.”

Can a Sugar High be a Problem in Cell Culture? You Betcha!