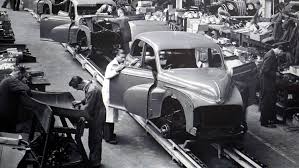 Automation of manufacturing processes has been around for industrial applications for many decades. In 1913, Ford Motor Company introduced the assembly line, which can be considered one of the first forms of automation in manufacturing, for car production. It boosted Ford Motor’s production rates, as well as their profits, Ford’s assembly line and mass production was the first in the world; cutting car assembly time from one car every twelve hours to a car every one and a half hours.

Since then, automation has been widely adopted and has become fundamental to quality and efficiency in manufacturing. Beginning in the 1980’s in chemical processing, advanced automation, process control, and on-line optimization have played key roles in improving plant performance in petrochemical and bulk chemical production. With the advent of genetic engineering in the 1970’s, it became possible to manufacturing highly pure biologic products in large quantity.

To date, production of recombinant biologics has been largely performed using discontinuous methods in batch processes. Recently, continuous manufacturing of therapeutic proteins such as monoclonal antibodies has begun to be considered seriously. Several biotechnology and pharmaceutical companies are developing methods for continuous processing and methods for scale up are being developed.

We highlight here a recent article of note. Daniel Karst, Fabian Steinebach and colleagues at the Institute for Chemical and Bioengineering in Zurich, Switzerland, describe integrating cell culture with product capture in a continuous manufacturing process (The article is entitled “Process performance and product quality in an integrated continuous antibody production process.” Biotechnol Bioeng. 2016 Aug 6. doi: 10.1002/bit.26069). They demonstrate, using a monoclonal antibody-producing CHO cell line, the capabilities of linking two unit operations, cell culture in perfusion mode with a continuous affinity capture step. Integration of the two systems was enabled by suitable control loops regulating the continuous volumetric flow and adapting the operating conditions of the capture process. For the latter, an at-line HPLC measurement of the harvest concentration subsequent to the bioreactor was combined with a mechanistic model of the capture chromatographic unit, enabling optimal buffer consumption and productivity throughout the process. We highlight this article as an example—that linking two production steps represents an important step in achieving efficient yield and product quality from an integrated continuous manufacturing system.

Click to purchase the article by Karst et al.

Manufacturing Efficiency: Making it in the 21st Century