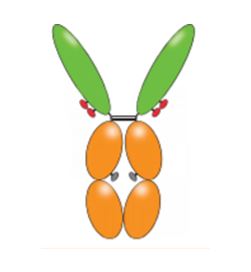 At Chamow & Associates we have an ongoing interest in therapeutic Fc-fusion proteins.  We have published recently on the subject (A. Linderholm and S.M. Chamow, Immunoglobulin Fusion Proteins, Parts 1 and 2, Bioprocess International 12(9) 30-35, 2014 and 12(10) 20-27, 2014, respectively), and Dr. Chamow has presented at conferences including last month at PEPTALK 2018 in San Diego. The ability of this technology to extend the in vivo half life of otherwise unstable proteins makes this an exciting category of biopharmaceuticals that has garnered interest throughout the world.

Seven novel Fc fusion proteins currently in preclinical and clinical development are highlighted in a recent review article published by Reva Jafari and colleagues at the Tabriz University of Medical Sciences in Iran.

Among the novel Fc fusion proteins listed in the article, a few are worth mentioning:  While the furthest along in clinical development is trebananib, an angiopoietin (Ang) 1 and 2 neutralizing peptibody with potential antiangiogenic activity, its fate is uncertain.  It was not successful in its first Phase 3 trial in ovarian cancer.  Amgen developed the drug and says that, at this point, its clinical value is not clear.  Blisibimod is a BAFF receptor IgG fusion protein that targets B-cell activating factor, or BAFF, which has been shown to be elevated in a variety of B-cell mediated autoimmune diseases. In 2017, Anthera Pharmaceuticals completed a Phase 3 study (CHABLIS-SC1) of blisibimod in systemic lupus erythematosis and obtained promising results.  Asunercept, a CD95 receptor Fc fusion protein, is being developed by Apogenix AG.  The company has reported statistically significant efficacy in a controlled Phase 2 trial in recurrent glioblastoma.

Chamow & Associates assists biotechnology companies in producing novel therapies like this for clinical testing and welcomes your inquiry.